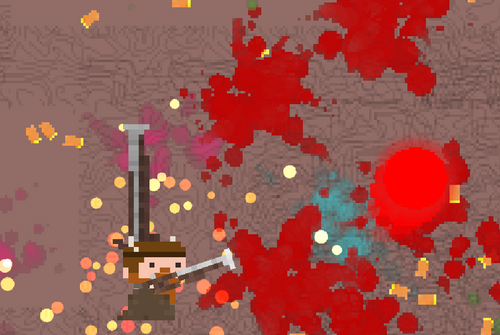 Optimizations:
- Changed visual-only objects to write to texture then delete.

- Massively Improved pathfinding, enemies will no longer stack ontop of each other.

- Ice Goblins no longer deal damage but instead apply a 2/3rds of a second slow to the player.

- Fire Goblins now deal 50% of their previous damage upon hit and then the remaining 50% after the knock back is complete as burn damage.

- Acid Goblins no longer deal impact damage, instead spawning a pool of acid at the player's feet that deals damage over time.

- Acid Goblins range has been reduced by 50% but now create pools of acid, even if the shot misses the player.

Visuals:
- Blood visuals for persistent blood have been darkened to offer a better contrast to projectiles.

- Acid visuals have been made translucent to offer a better contrast to projectiles.

Dwarves, Goblins, Guns, Beards, Bullets, Blood. We've got it all.